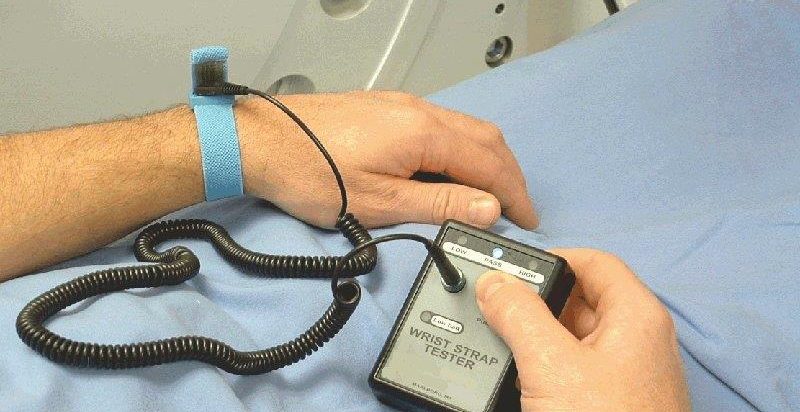 In a monoplace chamber, the patient should be grounded. This is commonly done with a wrist strap (a.k.a “grounding strap”, “grounding bracelet”). If the same coiled wire and/or wrist band is used for different patients, it must be disinfected between patients. If patient-specific wrist bands and coiled wires are used, they do not need to be disinfected after each use. If only the wrist band is patient-specific, the coiled wire must be disinfected between patients. The coiled wires and wrist bands used to ground hyperbaric patients are not unique to the hyperbaric industry. They are commonly used by the electrostatic discharge industry for personnel grounding. Therefore, these devices are commercially available from multiple sources. The specifications for the coiled wires used by most monoplace chamber manufacturers include a standard banana plug at one end and a 4mm snap at the other end. There is also a 1 megohm resistor built into the wire. Some people use a disposable EKG patch each time instead of a wrist band. Although the EKG patch works, it was not designed for grounding purposes and its use will probably not be endorsed by the chamber manufacturer.