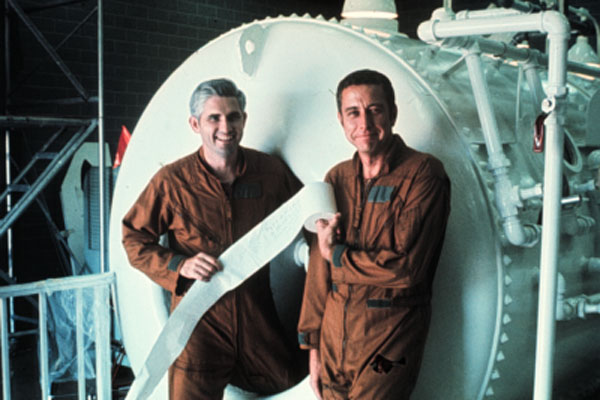 In April 1974, the USAF Hyperbaric Center was established at Brooks AFB, Texas under the direction of Col Jefferson C. Davis, MD, with the purpose to determine if there was a role for hyperbaric oxygen (HBO2) in the treatment of war related injuries (1,2). Lt Col Richard D. Heimbach, MD, was the Chief of Medical Operations, and Maj Paul J. Sheffield, PhD, was the Chief of Diving Operations.

Selecting the HBO2 treatment pressure and duration for wound healing enhancement required considerable thought of benefit (healing) versus risk (oxygen toxicity/decompression sickness). There were several HBO2 physiological studies in Europe and North America that suggested a treatment pressure of at least 2 ATA. At that time, Dr. George Hart was treating wounds in his monoplace chamber for 90 min at 2 ATA. In his multiplace chamber, Dr Eric Kindwall was using the “End Special Table” that had been introduced to him by Dr Edgar End in 1969. It consisted of O2 administration for 15 min during pressurization to 3 ATA, 30 min at 3 ATA, and 15 min ascent to surface for a total HBO2 exposure of 60 min. (Kindwall EP, personal communication, May 23, 2002).

In 1974, Dr. Davis implemented a hyperbaric treatment protocol for wound healing enhancement, which consisted of intermittent oxygen administered by mask at 2.36 ATA (45 fsw) for 90 minutes. The 90-minute duration was chosen based on the original work of Boerema (3) who used 90 min of HBO2 at 3 ATA for treating gas gangrene. However, the Boerema Gas Gangrene Protocol was ruled out for wound healing enhancement because of the risk of CNS oxygen toxicity. Although acceptable for a life threatening case of gas gangrene, it was considered to be too great a risk for a patient undergoing a 30-day course of hyperbaric wound healing treatments.

Tightly fitted aviator masks delivered the oxygen. Mask oxygen measurements revealed it to be very efficient for most patients but one improperly fitted, oversized mask delivered less than 95% oxygen (4). Dr. Davis felt that there was a possibility that the patient’s mask might not get a perfect seal so a pressure above 2 ATA should be selected. To ensure that the patient received oxygen at least equivalent to 100% oxygen at 2 ATA, he initially chose 2.5 ATA (49.5 fsw) but desiring to stay well within the 50-fsw decompression tables, then backed off to 45 fsw (2.36 ATA) to reduce the risk of decompression sickness in inside attendants. There was concern that the chamber operator might overshoot the 49.5-fsw level, which the Air Force rules at the time would require the inside attendant to decompress on the 60-fsw table. The 45-fsw setting was an easy mark on the gage for the technician to maintain.

Intermittent air breaks (20 min O2, 5 min air) were given to reduce the risk of pulmonary oxygen toxicity (5). Initially, 5-min air breaks were chosen based on the US Navy treatment tables. By 1976 the Duke oxygen-hood assembly was introduced. It was a closed circuit rebreather system, consisting of a plastic hood that was taped at the patient’s shoulder, a Sodasorb canister to scrub the CO2, an ice bath to reduce the water vapor content, and a Venturi valve to circulate the oxygen within the hood assembly. Oxygen measurements in the hood showed that 10 minutes were needed to reach 100% oxygen in the closed loop system, so 30-min oxygen breathing periods were prescribed. This was accompanied by an extension of the air break to 10-min. Within a few weeks, the cumbersome closed loop assembly was replaced by a continuous flow of oxygen through the hood, resulting in 100% oxygen being achieved in the hood in less than one minute. The plan was to resume the 20/5 oxygen/air breathing cycle, but because of patient preference, the 30/10 intermittent schedules were retained for the hood oxygen delivery.

The Davis Wound Healing Protocol has withstood the test of time and has become the U.S. standard for multiplace hyperbaric facilities.