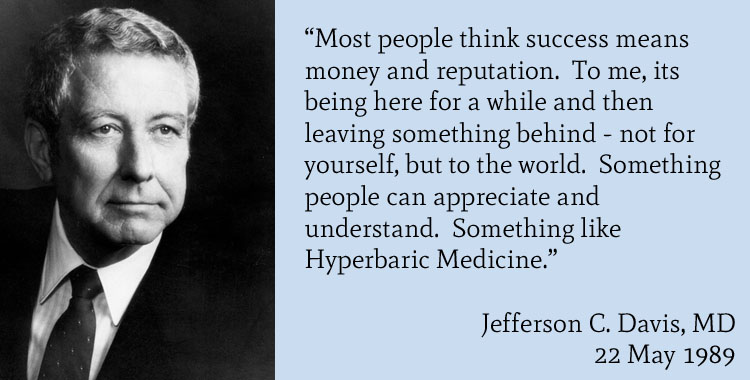 Dr Davis was born December 7, 1932 and raised in Neosho, Missouri.  After receiving his MD at the University of Missouri in 1958, he joined the US Air Force Medical Corps to become a Flight Surgeon.  He received his MPH from the University of California at Berkeley and was Board Certified in Aerospace Medicine. He studied diving medicine at the US Navy Experimental Diving Unit in Washington DC. In 1965, Dr Davis and his colleagues created the first US Air Force course in Hyperbaric Medicine. He founded “LEOFAST,” the US Air Force predecessor of the Divers Alert Network. In 1974 he founded and became the first Director of the USAF Hyperbaric Medicine Center at Brooks Air Force Base Texas, which now bears his name. He created the Davis Protocol in the application of Hyperbaric Medicine for wound healing enhancement. He became Medical Director for Medical Seminars’ Medicine of Diving Program in which physicians from all medical specialties could learn to treat injured divers and to serve as consults to their local diving communities.

“Most people think success means money and reputation.  To me, its being here for a while and then leaving something behind – not for yourself, but to the world.  Something people can appreciate and understand.  Something like Hyperbaric Medicine.”

In 1979, after 20 years of service Dr Davis retired from the US Air Force as a Chief Flight Surgeon in the grade of Colonel.  Dr Davis became founding member and President of International ATMO, Inc. the first known contract provider of wound care and hyperbaric medicine services.  He set up a successful practice at two San Antonio hospitals.

Dr Davis was co-editor and author of Diving Medicine, the classic Bove and Davis textbook (1976, 1990). He was co-editor and author, with Dr TK Hunt, the first hyperbaric medicine textbook, Hyperbaric Oxygen Therapy (1977).  It was followed in 1988 with Problem Wounds: Role of Oxygen, which is a seminal document in wound healing.  He was a highly sought-after lecturer and authored over 70 papers and book chapters, and produced 5 books.

In 1981, the Academy of Underwater Arts and Sciences bestowed on Dr Davis the NOGI (acronym for New Orleans Grand Isle) Award in the category of Sports/Education for his contributions in making recreational diving a safe, enjoyable and accessible activity for all who love the ocean. In 1986 he received a Citation of Merit from the University of Missouri Medical Alumni Organization. In 1990 the island of Bonaire dedicated a reef as the Jefferson C. Davis, MD Memorial Reef. In 2000, The Cayman Islands posthumously inducted him into the International Scuba Diving Hall of Fame.  The UHMS Gulf Coast Chapter has named their most prestigious award the Jefferson C. Davis MD Memorial Award which is presented for clinical excellence and research in clinical hyperbaric medicine.

Dr Davis was Adjunct Professor of Environmental Medicine at the University of Texas School of Public Health in Houston. He was President of the Aerospace Medical Association, the American College of Preventive Medicine, and the Undersea & Hyperbaric Medical Society. He was the National Consultant to the US Air Force Surgeon General in Hyperbaric Medicine. He was medical consultant to the space program, chairing the NASA committee that planned the hyperbaric treatment capability for the first US space station.  His compassion for his patient’s well being was legendary and he contributed much to the diving, aerospace and hyperbaric medicine communities.